Now I’m officially an artist. This would go in a museum had I no use for my fingers at the time. Letters for purchases of this masterpiece will be coming any day now. 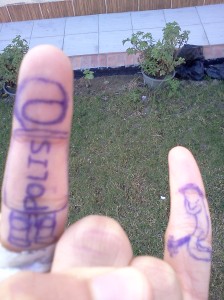 Explanation: A while back I tried to draw four drawings on four fingers, so that all two-finger combinations would mean something different. I managed to get only four two-finger meanings, out of six possible ones. I think the meanings are fairly obvious. Except the last one. Is he trying to propose to the soldier? That was supposed to be someone whimpering. Don’t tell anyone.

What strangers liked most