The thing about Imposter syndrome is that if you figure out it’s the reason behind your feeling of inadequacy, you’re implicitly telling yourself that, though you feel like an imposter, it’s just the Imposter syndrome making you feel that way, and you really aren’t that bad, as per the definition of the syndrome, effectively giving yourself a sneaky pat on the back.

The Somalian said, nibbling the last bits of his apple:
“To sum up today: I say that we are a Collective of reactions to external stimuli, physical and spiritual, beginning in the womb, and continuing as both intra-reactions —reactions to our reactions to stimuli—and extra-reactions —reactions to external reactions to our reactions. Based on our agreement on the logicality of this statement(thanks in part to my patience with you) we realize we should abandon the notion of our micro-uniqueness; we don’t react uniquely to stimulus, we share that reaction with millions of people, but rather we realize our macro-uniqueness; we are a unique collective of reactions built up over years. We are different because we had different lives, not unique ones, that made our reactions ultimately unique. That, young messiah, is the first amendment of compassion.”

She liked to think she is overtly covert, but covertly overt. Her inner most thoughts were public, and they were about her not sharing her inner most thoughts. Everyone noticed she was a very reserved person, but no one knew how much she tries to stay that way. She had, half fortuitously and half intentionally, sculpted herself into a paradox. One of the more perceptive men in her life wittingly told her once: “You talk about your deepest thoughts freely, openly and simply. And no one believes a word of it. It shouldn’t be easy baring your soul; if you do it in a seemingly easy manner, it comes off as either childish or deceptive”. She said she’s way too invested in herself to give a damn either way, which he answered, not ironically, by asking her to take things seriously for once.

The Somalian said, nibbling the last bits of his apple:
“Why do you think Susie sells seashells by the seashore? Because she is a mildly amusing introduction into Implicit Egotism. It’s a theory that proclaims that we tend to gravitate to things that resemble us. One facet of this is our tendency to favour things that share letters with our own names; Dentists named Dennis, and Lawyers named variations of Laura are examples of it in picking careers; more Jacks in Jacksonville and more Virgina’s in Virginia are other examples of places to live.”

She turned her head to him with a sudden movement, her hair brushing his face, and said, smiling with her perfect teeth: “You’re gonna write about me one day, ain’t ya?”. He said teasingly: “Yeah, I’ll make you an intelligent zombie”. She pouted and then ate his brains.

The Somalian said, nibbling the last bits of his apple:
“Give a man a fish, and he’ll eat for a day; give a man a fishing rod, and he’ll chop it up and use it as firewood. Or sell it for ten fishes and be just as hungry on the eleventh day. Throwing resources at a crisis of need isn’t a solution, eliminating the causes of those needs becoming a crisis is. Charity is futile alone, in order to solve world hunger. Your freely gifted foods and supplies are only band aids to the disease, the cancer, of resource and human exploitation. You couldn’t have used the fishing rod for fishing, there are simply no rivers.”

Don’t worry, you can tell me how spurious you think I am after reading what I’d like to say. I feel the same way, this is written in a language you and I don’t converse in. An embellished retouched language, with no curse words. That’s certainly fraudulent. You may also add a few choice words that reflect my personal vacuity, apart from writing, which, no doubt, would contain words in the manner of: “Without any original thought”, “pretension and vacuity”, “follower”, and “ideologue”. You may avoid calling me an idealist, you still think of it somewhat positively, though you view yourself more realistic, grounded, truthful than me of course. Don’t fret, and don’t bother choosing your words delicately, you’re more right than you imagine.

Today, a friend of mine spends his ninth day in prison. That doesn’t concern you much, to tell you the truth. Nine days are meagre, these days. Even his ten year sentence is not too worrisome. Have you heard of the girl that was handed a thirteen year sentence for distributing pamphlets in the Tram today? I read the news too, then I went by my day, per usual. Religious people have long told us about Sin Familiarity: when you repeat a sin, you get used to it. That’s true for almost all things, starting with that tart or bitter drink at first, and ending with hearing about a boy’s murdered body being found in the desert, a day after his last exam. That’s not unfamiliar now, you’re not as sensitive any more, we have trodden over that. Only your closest friends will feel the shock. Perhaps a few more if you were written about, or if there was a documentation of your passing; the circle of the genuinely affected could widen. You remember, no doubt, the paralysis you felt when you saw soldiers dragging, kicking and strip the modest lady in the square. You remember the fury, the subjugation, you felt at the sight of the brave Alexandrian fellow, opening his arms and baring his chest to the soldiers, then the shot is heard, the man is down, and the camera shakes as if recoiling in horror. I believe in our sincerity then. Not so much now; I’m feeling more frailty and failure for my jailed friend than for the murdered student.

We’re not at the fraudulence part yet, though we are nearing. Let’s. They will tell you a great deal, and they’re right, that this isn’t the time to “distribute pamphlets in Trams”, or for a protest. This is a luxury we no longer have, and prison is no honour or freedom as the songs go. They also say that this is a time for really small battles. A detainee to write of, or sponsor, adding to your knowledge, or what they call, without humour, “spreading awareness”. Mind you not that many of these intellectual advisers view their contemporaries’ answers to our eternally tormenting question “What now?” a colossal mistake and a display of unprecedented banality(make certain to preface any invective claim towards your opponent with the word “unprecedented”), and that, should you follow that other opinion, you are wasting your energy and, perhaps, gutting what remains of the revolutionary spirit; they too will not stick to their own answer, as if their roles were only to spread it. They also possess an impressive capacity for argumentation, and their time is cheap.

Do not forget that you’re always thinking of fruitlessness. That is a part of your imagined brain, and I also imagine you as the majority of whom I know have pondered about themselves a little. Ideas like “There’s no use” and “We are nothing” will not leave your head; if you attempt to follow any of the aforementioned advice, your readings will only fuel your realization of your true size, and your striving will only intensify your frustration. Finally, add to what’s before your view of your fraudulence as wholly encompassing your entire existence, not a part of it, a fraudulence deeply rooted in your soul, as if the only truthful thing in you is the completeness of it. You/Me constantly think of escaping now. I don’t want to hear “What now?” again, I don’t want to hear of a detainee, a victim, a poor one, a sick, a refugee, or another child. I don’t want to feel the vastness of life when its little details are busying me not to see its tightness. Was the pamphlets girl thinking of her action as a way out as I do? Did she think “Let them do to me as they please, I no longer care, at least I’m leaving it with my actions attesting my convictions”?

People think a great deal whether they wish to travel to the past or the future; I only wish if time would stop, and people, and thinking.
Have you seen the “Circus Dwarf” before? It’s, as you see, a picture of a circus dwarf. This is a picture that excites and creates many emotions. I couldn’t once describe what I see in it; perhaps I came close this time. 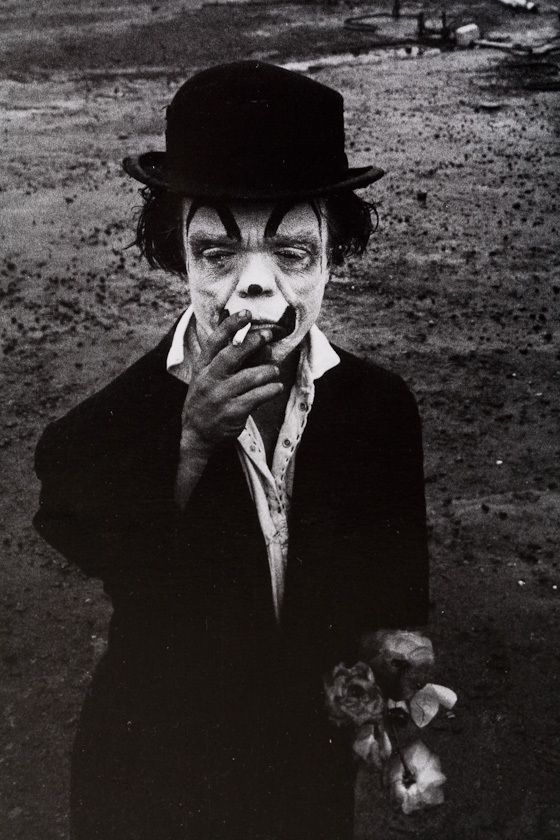 What strangers liked most